One of those great timeless songs that never really got heard, yet, by one of those extraordinary talents who is still a little bit too obscure. Cree Summer is badass. This video is more than a video.... it's work of art. Enjoy!

This is most definitely funky. Enjoy! 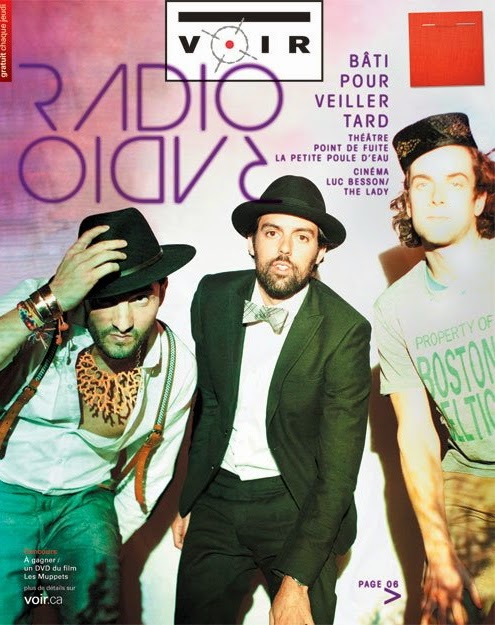 They sing and rap in French and English. At first I assumed that this act off the Bonsound imprint called Radio Radio was out of Europe, but it turns out they are Canadian.

The beat at the beginning of this first track, below, bored me from the get go and I just about clicked to another song. But then the lyrics start: "She makes more money than me, she drives a better car than me... I eye ... just wanna cry eye". This song made me laugh many times and served as long overdue morning laugh therapy. As I heard more of this unique and interesting project, the music really grew on me. And so did the seriously excellent film making.


The above video, Guess What?, was directed by the talented director of photography, Jonathan Bensimon. It was produced by Cherie Sinclair/Sarah Siddons/The Field. The colorist/SR. Flame was Daniel J. Kelly and JR. Flame was Nicolas Pellicelli. The Editor was Geoff Ashenhurst. Post Production by Motor/Flame Artist with Post Producer Catherine St-Hilaire.

This next track is strange... Feels like some sort of suspended reality, like being put to sleep on drugs in the hospital. The video is strange... Strange is good. I like it.


The above video, Galope, was directed by Arnaud Brisebois. The Producer was Josh Usheroff of Black Box Productions Ltd. The Cinematographer was Jonathan Decoste. 1st Assistant director was Aurélie Bernos. Art director was Gregory Nowak. The stylist was Sydney Krause. Make up was Amélie Bruneau Longpré. The hair stylist was Martin Alarie. The editor was Elisabeth Olga Tremblay. Post-production by Mokko Studio. The colorist was Thomas Halle. Great work to all!

Here is another track that made me realize that Radio Radio takes their music videos seriously through excellent cinematography.

This next video is far out and the track itself is great, even though I have no idea what they are saying in French, yet. I'm digging the groove and the flow of the rap.


The above video was directed by Gabriel Allard Gagnon and the director of photography was Iouri Philippe Paillé. The artistic director was Stéphanie L'Allier. Editing and post production by David Valiquette with graphic design by Noémie Darveau Gabriel Allard. Mettant en vedette le shaman Tiburcio Kan May. Production by Ménaïc Raoul. Executive producer was David Valiquette and director of production was Dominique Duneton of Yucatan Productions.

The photo by Mamoru Kobayakawa atop the page is Radio Radio on the cover of Voir journal.

When thinking of San Francisco, some think of Bill Graham days, or modern day things like the band Train which emerged from there. Now there is The Mowgli's with their song titled San Francisco. Thanks to Ryan for the tip.... can't remember Ryan's last name... darned beerzheimers.

Connect direct with The Mowgli's at themowglis.bandcamp.com

The artist out of Spain known as Bigott might know how to push some people's buttons with song titles like "God Is Gay" and songs like Cannibal Dinner, espcially after the lunatic man ate off the face of the homeless man in Miami, Florida.

Firehorse - Live on WFUV's Alternate Side


Firehorse - If You Don't Want To Be Alone


Connect direct with WFUV at WFUV.Org

Connect direct with Firehorse at ThisIsFirehorse.Com

Connect direct with Battles at bttls.com

Some more from Ruby Jane

Some more from the young authentic Americana artist with that "it" thing.: Ruby Jane (aka Ruby Jane Smith)