Connect direct with Gotye at Gotye.Com

Came across this cool, made in mid 2009, raw video of the Icelandic musician and singer known as Mugison, while he was on his 5 boroughs in 1 day tour performing his song entitled I Want You. The performance was filmed live by film maker Scott Fine inside the Jacques Marchais Museum of Tibetan Art in Staten Island, New York, in front of a small group.

Gaby became one of our favorite indie artists out there, since the moment we noticed her in 2006. and we've come to admire her greatly since then. She has the right attitude in how she has worked to get her music out there, play lots of shows... she has a consistent vibe, very relaxed. She has integrity. Always making something, working on new songs, playing with new people, traveling to far away places to perform and tour... WOW... She is destined for superstardom on this path she is on, but superstardom isn't necessarily her trip. She is just a lover of blues music, tranquility style life with a solid work to live rather than a live to work ethic. Things like this are not always what they appear to be, but that's the feeling you'll get from Gaby Moreno. Her Peace of Mind radiates. That's why Gaby Moreno is destined for so much more success than she has already achieved in creating a self-sustaining working band and music career as a recording artist, songwriter for other artists, with several film & TV credits on the music side, collaborating with many and working as a touring artist.

Here is just one more collaborations of Gaby's.

Came across music video producer Elliot Glass on YouTube a while back and immediately loved his films of LA indie bands shot in what seems to be various living rooms. He has amassed many of great recordings. His crews at his company, Little Videos, records the sound beautifully and the photography/video work is pretty darned good and always fits.

In this recording of the band, Count Fleet, Glass credits Jonathan O'Brien at Red Rockets Glare in Los Angeles for the recording. It was xixed by Raymond Richards and filmed by Scott Oshiro and Dave Smallen

Rafter - No Fucking Around (Music Video)

Here is a indie artist with a killer song and a great video.

Rafter - No Fucking Around

Connect direct with Rafter at RafterRoberts.Com

In 2007, first heard this wonderful Indonesian artist Sandhy Sondoro from Jakarta. He has a soulful edge that grabbed me the moment I heard it. He has bits of Joe Cocker, Michael McDonald and John Mellencamp inside of him. But, Sandhy is all original.

I like the way Sandhy sits down on the stool and delivers this kind of sweet sound. Super positive vibes and energy flow out of this guy.

The Samples is a band of real musicians with way cool songs that groove. None of the recordings sound "produced". Every song is low-fi or no-fi. But there is a quality of authenticity and consistency that is special.

The Samples - When It's Raining

This video is contains audio from underproduced concert footage from 1988 - but through the low fi recording is a great band that jams hard.

The two songs below reminds me of a burrito rolled up with some Peter Gabriel, Neil Young, Paul Simon and The Police mixed in. But it's all original. These guys jam their tails off.
(audio on next two videos not so hot of a signal - please turn up volume to capture it)

Connect direct with The Samples at TheSamples.Com 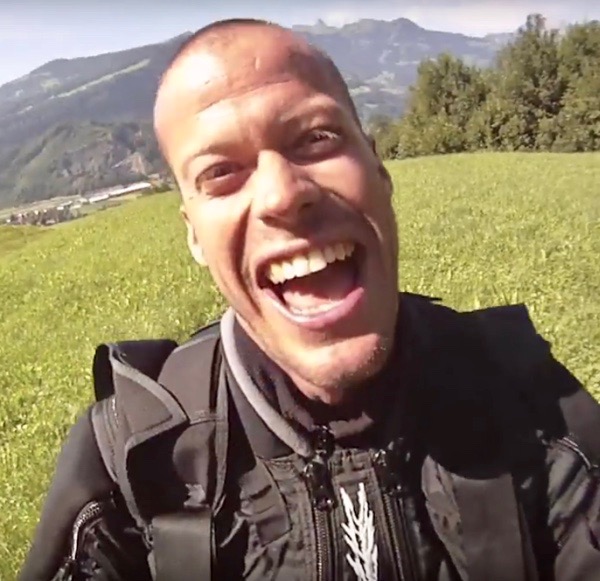 This is one of those indie spirits, Jeb Corliss, also known as the Flying Man. He is a daredevil who wears a flying squirrel suit and jumps off big cliffs and out of planes and eventually ends up back on land. Corliss stars in this fantastic thrilling video entitled Grinding The Crack, set to the AWOLNATION song entitled Sail.