Never get tired of Avery*Sunshine

A classic video clip of Avery*Sunshine when she was working out her song titled I've Got Sunshine before it was recorded in the studio and eventually gained some attention. Was recently at a international 5 star hotel that has her playing on their loop and was pleasantly surprised to hear the studio version of this song on the FM radio long after it was released. A artist and a song with legs, as they say. Staying power!

This is a simple one or two mic recording in a rehearsal room with her background singers as they were figuring out the flow and tightening up the song before hitting the studio to lay it down for real. But this IS real too. Shot on a camcorder, it captures true true essence of Ms. Sunshine: Her songwriting process, her soul and her true indie spirit. Ahhhmazing stuff!

Super Indie, Gaby Moreno, is playing Cafe Largo in Los Angeles on Tuesday September 4, 2012. The show is to celebrate her latest record titled Postales. Although Postales is a record made entirely en Espanol, Gaby will perform a variety of English and Spanish songs at Largo. 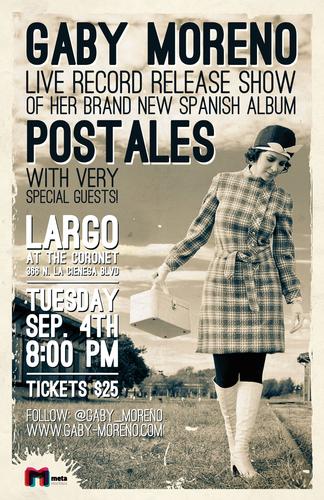 Heard about this through the great fabulous Nneka.

The song is titled Sowa by the artist Fatoumata Diawara.

Here is another unique act who has done a tasty cover of a song by Little Dragon , just like Lianne La Havas   did and many other great act...