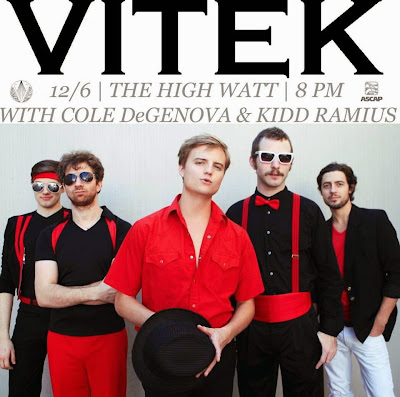 Vitek is a very under the radar act out of Nashville, that has a good feel with real players that includes a horn section. The groups leader is Gabrahm Vitek, who also has been known as Gabe Vitek, on vocals & keyboards that includes a Fender Rhodes, an old Wurlitzer and other assorted pianos and keyboards that are featured in his videos.

When I say under the radar, I mean it. The various sites that link from Vitek's official YouTube page have all disappeared. I am talking about no more Facebook account, no more Twitter account and the domain name the band used is no longer.

Vitek recorded a song and made a conceptual video that has something about it.  The video, directed by  Annie Miller, might be better than the song, but the song is still all right. I came upon that video because of another a pretty interesting film take of them performing live in a studio environment. So here are both of those and one more, just below.

The next one below is titled Devil, Don't You

And, here is one more from a bit further back, in 2010, titled No Look Dancing

UPDATE: WE JUST FOUND VITEK: He is now in a band in Nashville that is named "Kind". Connect direct with Vitek on Twitter.Com/GabrahmVitek and Connect with his new band, Kind, at facebook.com/kindnashville