On The Road with Eliot Sumner and Lykke Li 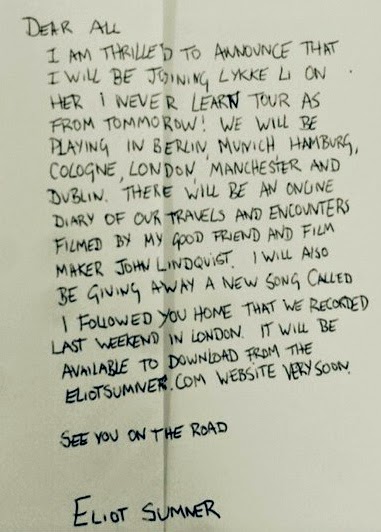 Back in April 2012, we wrote about and featured the music and videos of Sting's daughter, Eliot Sumner.  At that time her act was known as I Blame Coco. Click here to view that post.  A lot has happened since then.

Eliot Sumner has been paying her music dues the old fashioned way, through trial and error.  In Part I, below, Eliot explains that with her previous I Blame Coco material, after it was released and she listened to it, she felt "no relation to it". That is part of the trial and error music journey she joined before her adult life began.

But if you were ever a fan of her father and his band The Police, you will see and hear a bit of the Sting gene in Eliot.  But, she is all original and not copping someone else's groove, including her father's.  And it's a real delight to listen to, both that material she has moved on from, as well as the present.

Most recently, director John Lindquist, in association with legendary i-D Magazine which is now part of the growing & influential Vice media network, followed Eliot in Europe where she is the supporting act for Lykke Li's tour.

Tracks featured in the three candid videos below include Come Friday, Halfway to Hell, Wobbler and Information.  All are originals written by Eliot Sumner.

Eliot Sumner's bandmates are Nick Benton (guitar), Jan Blumentrath (keys) and Adam Gammage (drums).  We don't have links on the first two bandmates, yet, but you can connect direct with Adam Gammage at facebook.com/AdamGammageDrummer and at adamgammage.blogspot.co.uk where he has all sorts of great music links.

Connect direct with John Lindquist at John-Lindquist.Com and at Vimeo.com/johnlindquist

This post was originally created on February 28, 2015, with subsequent edits and updates by The Indies Network at TheIndiesNetworkCom, Facebook.Com/TheIndiesNetwork and https://www.twitter.Com/indies